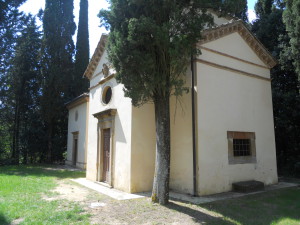 Just nearby the village of Montaione (Florence) there is the famous holy mountain San Vivaldo, best known as “Jerusalem of Tuscany”. Its name recalls the story of the hermit Vivaldo Stricchi from San Gimignano. Right by the chestnut tree where, where his body was found, a little church was built in 1320. This church was later enlarged and, in 1497, was given to Franciscan Friars Minor, who built a monastery offering pilgrims the opportunity to make a pilgrimage without going to Jerusalem (which at that time was in Turkish hands and therefore difficult to reach). In 1516 Pope Leo X granted an indulgence to all pilgrims who went there to pray. San Vivaldo became famous and still today remains a spiritual destination for many travelers in search of a magical place in which stop and pray.